Pennys Demolition Carry Out Works at No. 4, 5 & 6 Cornhill

On the current new build site are two historic buildings, one is three storey, No. 4 and 5, the other, No. 6, is two storeys built alongside Cornhill which is a narrow pedestrian alleyway.

Planning permission was granted around these buildings, which are in the Wellington conservation area, and the three storey buildings are Grade II listed. The scheme is to carry out major works to retain the historic importance and architectural value of the buildings and return them into dwellings after being derelict for a number of years.

Due to the nature of retaining the buildings for importance, the supplied heritage document showed a wide range of history with No. 4, 5 and 6 being homes to a range of trades.

Taken directly from the heritage survey we can see further history being written about these three buildings;

“The 1839 tithe map (shown below) shows the plot present today. Assigned a single number, with no visible divisions, it is possible that the property was in single ownership at this time.

The first edition 1:2500 OS map of 1890 shows the two buildings clearly divided. A narrow alleyway leads from Fore Street, behind the buildings on Cornhill, opening out into an orchard to the rear of the Smithy, No. 6. Three outbuildings are shown. These correspond to two of the ivy covered ruins which survive today at the rear of Nos. 4-6.

By 1904, little change is shown to the buildings, but there have been a number of additional outbuildings constructed along the alleyway and in the former orchard, now likely to be a yard, behind the smithy.

In 1930 changes were limited to the addition of an outbuilding in the south east corner of the yard and the loss of a building in the north-west corner of the yard. By 1964 the layout had stayed unaltered apart from the loss of a rear section of No. 7 Cornhill and an alteration to the rear of No. 6 involving the loss of part of the building behind No. 6 to the south. Cornhill from Fore Street in the 1980s is an attractive streetscape of buildings of various styles, stepped down the street. No. 4 was most recently used as a hairdressers and No. 5, a bookshop.”

Scope of our Demolition Works

Demolition works will be started by carefully demolishing the fire damaged two-storey building away from the adjoining property and retain the lower section of the original front wall along Cornhill. The front facing section is considered to be of historical importance and was originally built when the building was first erected.

Works to the three-storey building are more complex as the building has to be structurally supported at each floor level, internally and externally, in conjunction to demolition works to ensure stability to the structure at all times.

High level roof works are to be carried out to remove the slates and timbers and reduce an unsafe gable chimney. Internally, all items are to be removed leaving only the timber floor beams which are to be incorporated in the new reconstructions.

Whilst works were carried out, a safe pedestrian access along Cornhill by erecting a protective walkway using a double scaffold board and debris netting scaffolding incorporated onto access scaffolding to allow demolition operatives to carry out their works to the elevations. Demolition works were carried out systematically by operatives working from the fixed scaffolding on Cornhill and from a Mobile Elevated Work Platform (MEWP) on the site side of the building. A 360-degree excavator equipped with a rotating grab attachment assisted with the lifting and loading of waste materials, mostly rubble and wood, onto skips and lorries prior to off-site recycling. 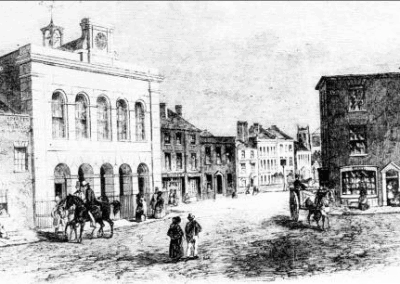 The Town Square, from The Illustrated London News, 1853 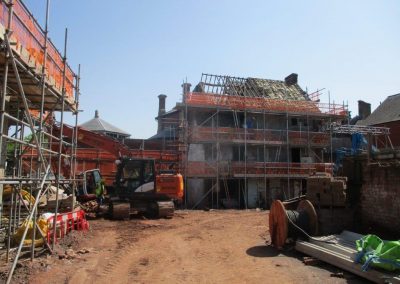 Works in progress at Cornhill with scaffolding propping the three storey building from inside and out whilst works take place within. 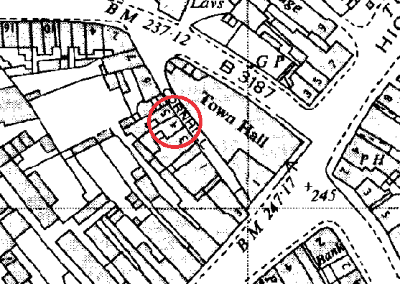 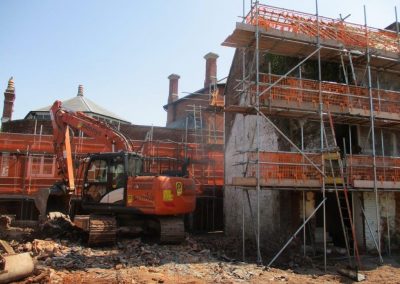 Works in progress on site with scaffolding supporting the three storey building. 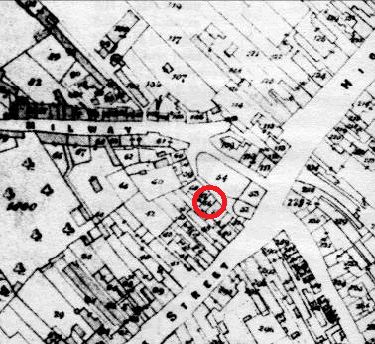 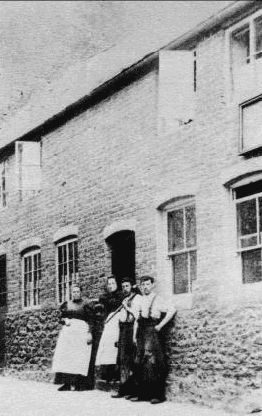 No.6 Cornhill in the Early Twentieth Century

The Baker family blacksmiths outside of No. 6 Cornhill in the early twentieth century. 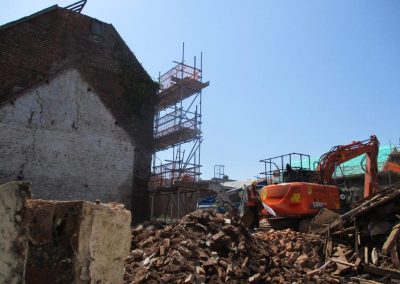 Works in progress towards the end of the demolition of the two storey building. 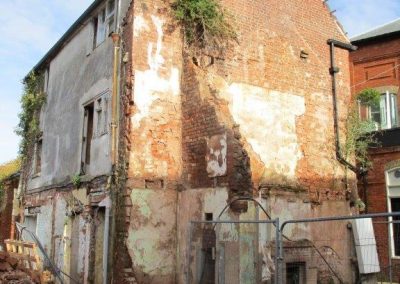 Side View of Derelict Three Storey Building at Cornhill

The side view of the derelict three storey building prior to works commencing. 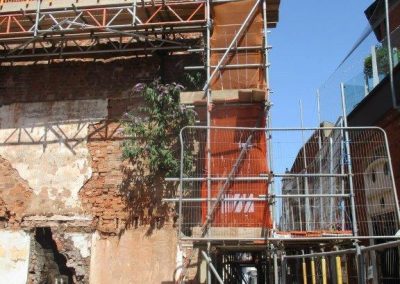 Propping the building from inside and out whilst works take place within. 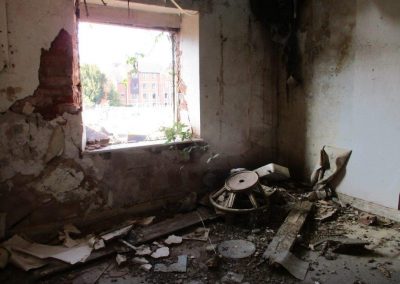 The inside of the derelict buildings to be demolished and retained. 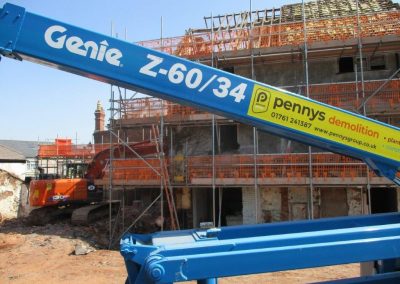 Our Genie on site at Cornhill. 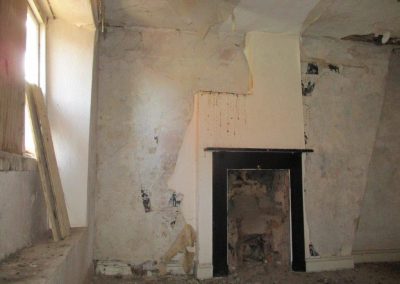 Inside of Cornhill Main Room

The inside of the derelict buildings to be demolished and retained. 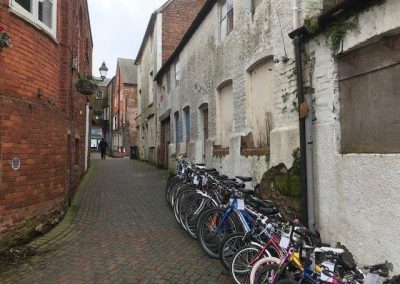 Pedestrian Walkway outside of the Site

The Cornhill buildings alongside the pedestrian alleyway prior to works commencing. 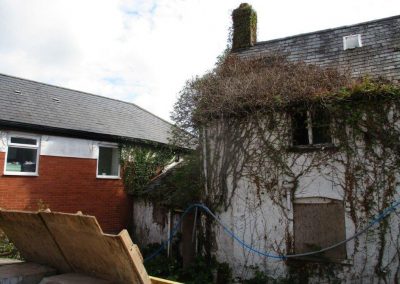 The derelict two storey building prior to demolition. 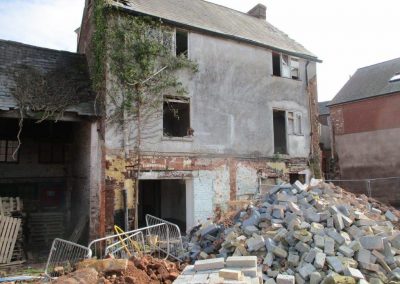 The derelict three storey building prior to works commencing. 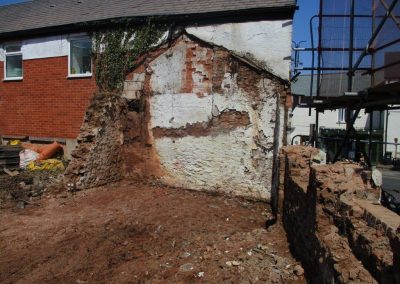 The adjoining property against the retained front wall after the demolition of the two storey building.